A brief history of Berkeley County

Welcome to historic Berkeley County,WV, one of the first settled areas of the State of West Virginia. Many Quakers and Scotch-Irish Presbyterians, along with the English and Dutch, became residents here in the early 1700s. They were followed by the Germans who built many present farm complexes. The County has a wealth of historic, architecturally important buildings dating from the 1740s into the 20th century. Many of these buildings, including several districts and villages, have been researched and placed on the National Register of Historic Places.

Berkeley County was formed from Frederick County, Virginia, in 1772 and named for Lord Norborne Berkeley. The County seat was established in the colonial village of Martinsburg, named for Thomas Bryan Martin, Lord Fairfax’s nephew, and was incorporated in 1778. The arrival of the B&O Railroad in the 1840s gave Martinsburg and Berkeley County a big boost. During the Civil War, Martinsburg and Berkeley County, still a part of Virginia, experienced conflict and much destruction. Many families had divided allegiances. In June 1861 Stonewall Jackson destroyed the railroad cars at the Martinsburg B&O Railroad complex and commandeered the engines, dragging them through Winchester to Strasburg. The Roundhouse and machine shops were completely stripped. The first major conflict in the area occurred on July 2, 1861, when the North’s General Robert Patterson crossed the Potomac River at Williamsport and defeated the South’s General Joseph E. Johnston and General Thomas J. “Stonewall” Jackson. On October 18 and 19, 1862 the Martinsburg B&O Railroad complex and Roundhouses were burned. After November 1863, Berkeley County became a part of the new state of West Virginia that supported the North.

In 1872 the Pennsylvania Railroad came to the area, and it, along with the B&O Railroad, gave the area an excellent transportation base. In early times, a major source of the area’s income came from selling flour produced by the area’s water-powered mills to the Alexandria and Baltimore markets. Electricity, replacing water power, soon followed and the area became a large textile milling center. 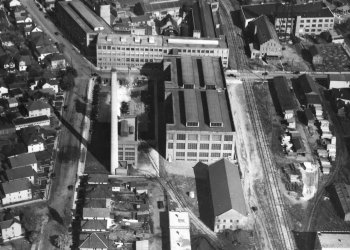